It has always been in David Gilmour’s nature to experiment and never stop until he gets the sound he wants. The Leslie rotating speaker is normally associated with Hammond organs but has been used by many guitarists for both achieving a great effect and to beef up the tone.

Leslie Cabinets
David first used a Leslie 147 on the intro on Narrow Way part 3, – one of his solo compositions on Ummagumma in 1969. He is first seen having a Leslie in his rig in 1971 although it is not documented whether this was for his guitar or for the VCS 3 synthesizer he controlled on early live version of Atom Heart Mother. However a Leslie 147 is widely used on most of his sounds during the Eclipse tour in 1972 (early Dark Side of the Moon performances). In addition to using Leslie with his guitar on most of the songs he also had an additional vocal microphone hooked up to it, which he sang through on Any Colour You Like (just like he does on Wish You Were Here).

– David pictured in the studio for the Dark Side of the Moon documentary. You can see the tall Leslie 900 behind him.

A Leslie 900 was employed on many of the songs on Dark Side of the Moon in 1973, – notably Us & Them, Brain Damage and Eclipse. In Phil Taylor’s book about David’s Black Strat, David is seen using a Leslie 760 cabinet with a Hiwatt and a Fender Dual Showman while recording Shine On You Crazy Diamond at Abbey Road studios.

David continued to use a Leslie 147 cabinet in combination with his Hiwatts during the 1973-75 Dark Side of the Moon tour. The recent release of their show at Wembley (London, UK) recorded in November 1974 is a great showcase for David’s mid 70s tones and the use of the Leslie cabinet.

Yamaha RA-200
For the recording of Animals, David switched to Yamaha RA-200 cabinets. This was notably used on Dogs and was also used on the following tour in 1977 and his first solo album in 1978. The Yamahas was also an important part of his sound on The Wall album and tour. The solo on Comfortably Numb was recorded combining the signal from a Hiwatt stack and the Yamaha rotating speaker cabinet. See this in depth article for more details. – (left) The Yamaha RA-200 revolving speaker cabinet used by Gilmour from 1977-1983. (right) The Doppola revolving speakers. David used three of these on the Division Bell tour in ’94. (Doppola picture used with permission from Frederic Peynet)

From 1972 David’s live setup has consisted of blending the signal from the Hiwatts and the Leslie. This combination is used on almost every song and rather than using the Leslies as a lead effect the signals are mixed creating a very broad sound with warm lower ends. The Leslie is mixed slightly lower than the Hiwatts allowing the â€œnormalâ€ signal to cut through.

The Yamaha was also featured on David Gilmour’s 1978 solo album and later on Final Cut. After over two decades of being stored away the Yamaha cabinet and the Alembic F-2B preamp was once again used on the Barn Jam sessions in early 2007. The cabinet, and the Alembic, is now located in David’s home studio Medina (Hove UK) where it was used for the 2014 Endless River recording sessions. The cabinet is mic’ed with two Neumann KM 86s on the tweeters and a Shure SM7 on the speaker.

The Doppolas
David had been using a Maestro Rover rotating speaker on the Division Bell sessions and this inspired Phil Taylor and Paul Leader to design the Doppola speakers that featured on the 1994 tour. These were custom built rotating cabinets with two 6″ 100W speakers in each powered by – and running in conjunction with – the Hiwatts. Leslie cabinets or the old Yamahas might have seemed the obvious choice, but Gilmour was after a slightly different sound and something a bit lighter to carry around.

The Maestro Rover
The Maestro Rover rotating speaker is a small rotating cabinet mounted on a stand, featuring a 6″ 35w speaker and controls for volume, speed and a foot control for switching the unit on/off. The Rover was reportedly employed by David during the Dark Side of the Moon recording sessions in 1972, although no footage can confirm this. 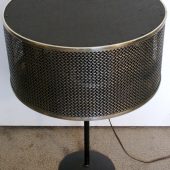 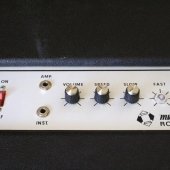 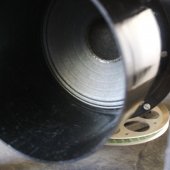 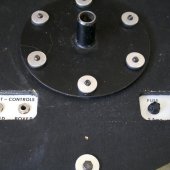 The Rover was featured in David’s 1993 setup for the Division Bell and Endless River recording sessions. The rig consisted of a duplicate combination of Fender Bassmans and Hiwatt SA212 amps, with the Rover standing on top mic’ed for stereo.