If there is one effect that truly defined the Pink Floyd sound in the 70s it’s the Binson Echorec. This echo unit has a unique sound and both David Gilmour and Richard Wright used it to create sounds that were quite innovative at the time. In this article we’ll examine this wonderful effect and how David used it.

Produced in Milan, Italy, the Binson’s had its peak in the 60s. They were unique in their construction, utilizing a specially designed steel/alloy disc or drum, which carried a durable flat metal tape. The drum was driven by a powerful AC motor, in most cases, via a rubber jockey wheel, which kept the transport very stable. Record and playback heads were arranged around the drum periphery. – from the Binson site – (left) David tweaking his Binson II unit during A Saucerful of Secrets filmed at Pompeii. (right) David pictured at Earl’s Court, London, UK in May 1973 with a Binsin II and a Binson PE.

Binson Echorec 2
The Echorec 2 was manufactured by Binson between 1961 and 1979. When Gilmour joined Pink Floyd in early 1968 he continued with the same setup Syd Barrett had been using for some years, – Telecaster, Selmer amps, Vox wah wah, Fuzz Face and the Binson Echorec 2. David soon started utilizing the full potential of his basic rig and developed a different sound than Syd. A sound that would help lead Pink Floyd away from the psychedelic label.

David used the Binson 2 model from 1968 up to the Animals tour in 1977 after which he replaced it with MXR digital units. He later recalled, “I was tired of cleaning it and needed something more reliable”. Although he probably traveled with several backups, the constant touring and not least the outdoor gigs must have been hell for the delicate Binson.

The Binson 2 makes a brief cameo on the 2003 BBC Dark Side of the Moon documentary, as a part of the recreation of David’s 1972 recording rig.

A Binson 2 is also featured in David’s new recording studio, Medina, located in Hove outside Brighton. Both Pink Floyd’s Endless River and David Gilmour’s Rattle That Lock was recorded in the studio but it’s not documented if the Binson is featured on the albums.

The Binson houses 6 12AX7 tubes. On the right side panel, there are jacks for three inputs and three outputs. On the left side panel, there’s a volt selector, input jack for the on/off footpedal switcher and a power outlet. The front panel has 6 control knobs, a 3-button channel selector and a level indicator. 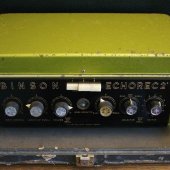 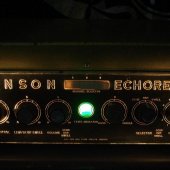 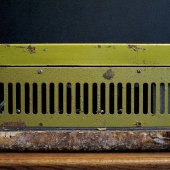 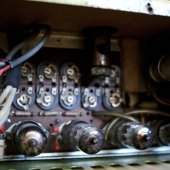 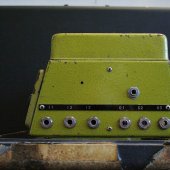 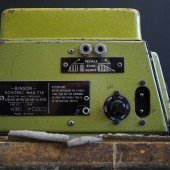 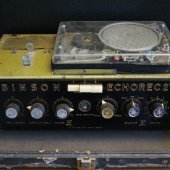 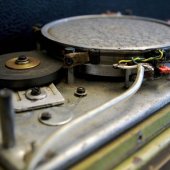 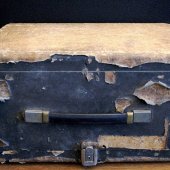 Input Control
Controls the input from the instrument to the delay path. It is possible to overdrive the input tube to achieve an overdrive effect, which then can be controlled by a volume pedal to keep it manageable to the amplifier. There are also internal trimmer controls to further adjust the sensitivity of the input.

Length of Swell
Controls the feedback/number of repeats.

Volume
Controls the delay volume based on the Input Control setting.

Bass/Treble
An Equalizer colouring the delay signal. The effect is very subtle changing from darker to brighter.

Level Indicator
This eye in the middle of the unit, shows the level of the input signal.

Channel Selector
Selects the 3 inputs for each instrument. You can have two channels active at the same time with different outputs, – one with effect and one dry, both delayed or both dry.

David’s setup
Between 1968-73 David had a very basic setup layed out on the floor that consisted of a Fuzz Face, a wah wah pedal, DeArmond volume pedal and an on/off foot-switch for the Binson. Later, the 1973-75 board and the 1976 Cornish board had built in on/off switches for the Binson that was connected through send/returns.

David would mainly use the repeat mode for a classic delay sound. The Binson 2 had a maximum time setting around 300-310ms, which was David’s main setting for most Floyd songs (he used the Echo/slap back setting on live versions of the intro on Time). The level and swell were both adjusted for different songs.

One of David’s trademarks in the early days was the sustained violin effect on the intro of Echoes and many other songs. On the beginning of Echoes on Pompeii you can see David using the slide, rubbing it back and forth on the high E string to create this sustained violin effect. This is achieved by drenching the tone with echo and adjusting the guitar volume for a mild ovedrive from the Fuzz Face. The effect is used on countless early Floyd songs from 1968-1971.

Echo oscillation (recorded with an Ibanez DE-7)
By adjusting the “Length of Swell” control you can get a very cool oscillation effect. This was used by David on some of the improvised songs Floyd performed in 1969 heard in the Man and The Journey suite and on A Saucerful of Secrets.

Violin effect (excerpt from Echoes, Live at Pompeii 1971)
The sustained violin effect is created by using a slide and rubbing it up and down the string over the frets, creating melodies/tones on the neck. David blend a very mild overdrive from the Fuzz Face (fuzz adjusted with the guitar volume) with rich echo. One can also boost the input signal on the Binson for a stronger tone.

Binson and Fuzz Face (excerpt from Careful with that Axe, San Diego 17.10.71)
This is a classic Gilmour sound from the 1971-75 era with a (silicon) Fuzz Face drenched in rich, haunting echo from the Binson.

Binson PE-603TU
On several occasions during the Dark Side of the Moon tour in 1973-75 David is also seen using a Binson PE in addition to the Binson 2. The PE was manufactured by Binson from 1971-’82. These units were built to fit into a specially designed rack unit, which could also house a range of power amps and mixer units manufactured by Binson. Some of this series were valve models and some were fully transistorized apart from one tube, which is the EM84 level indicator.

It’s not documented whether David’s unit was all tubes or not but I guess it’s safe to assume that it was. It’s also not documented why David needed both Binsons but as the Floyd songs got more and more complex, he would need several settings for each song. The PE also had a slightly longer delay time, – up to 370ms. David is also seen using he Binson PE on Pink Floyd’s far east tour (Japan and Australia) in August 1971.

A special thanks to Gary Griffith for helping out with Binson 2 details and pictures.