â€¨Fuzz has always fascinated guitarists. From the early days when you would pin a whole in your speaker, to the wide range of clones and boutiques that are available today. In this feature weâ€™ll look at a handful of models and how to incorporate these in your rig, with David Gilmourâ€™s tones in mind.

When David joined Pink Floyd in early 1968, guitarists had only a few pedals to choose from. The fuzz was a staple in most setups and like Jimi Hendrix, David also relied on the Dallas Arbiter Fuzz Face for his overdrive and lead tones.

In early 1971 he swapped the germanium transistor model, with the slightly more aggressive, and more reliable, silicon transistor model. The pedal was featured on classic songs like Echoes, Time and Money. In 1976, David replaced his old fuzz pedals with the Big Muff.

The typical two-transistor fuzz circuit is recognized by its raw and uncompressed tone. Itâ€™s dirty and sometimes hard to tame, yet incredibly responsive and dynamic. Just by adjusting the gain with the guitar volume, a single pedal could produce anything from boosted cleans to warm overdrive and thunderous growl.

Big Muffs are often referred to as fuzz but both the Muff circuit and its tone is quite different from the fuzz pedals. The Big Muff has a much more saturated tone, with a smoother character and sustain. The distortion pedal appeared in the late 70s.

While fuzz and Big Muffs were designed to push tube amps into powerful tube distortion, the distortion pedal was designed to give guitarists a chance to get those tones on whatever amp and volume they would utilize.

Fuzz on the pedal board

The vintage circuit fuzz are perhaps the most demanding pedals you can feature on a pedal board. They donâ€™t like active pickups and buffers can mess up the tone pretty bad. Theyâ€™re best left alone in the chain but at least be sure to place them first in the chain, keep them 2-3 pedals away from any buffers and allow them to be powered by 9V carbon batteries. That will ensure the best signal and tone.

Fuzz pedals can sound harsh and thin on smaller setups and low volume levels. They need a minimum of volume, and preferably a bit of tube break up, to open up and get that dynamic tone. You can compensate to some extent with a transparent true bypass booster placed behind it, like the Colorsound Power Boost. However, in most cases, youâ€™re probably better off with a more versatile pedal, like the RAT, which is capable of producing a wide range of different fuzz and distortion tones. Read more here.

Itâ€™s easy to dismiss a fuzz pedal for being too wild, harsh or thin but once you get to know the pedal, finding its sweetspot on your rig, theyâ€™re really some of the most fun pedals to play around with. The vintage fuzz circuit is incredibly versatile.

Hendrix and Gilmour mastered them perfectly and knew how to combine the sheer power of their amps with the gain and volume of the pedals. By using the guitar volume control, they could control the signal feed from the guitar to the pedal and get just the right amount of gain for different tones and passages in the music.

What I love about the fuzz are all the harmonics, the weird sounds and that slightly unpredictable nature. You never really know what to get when you pick a string. The fuzz circuit is far from perfect, which makes it all more unique.

The germanium transistor can change in tone in different temperatures and humidity. The silicon transistor will produce all kinds of wild oscillation sounds if you push it hard. Both will react differently to different types (and brands!) of batteries. Love them or hate them.

The first generation fuzz pedals were based on the germanium transistor. Recognized by its warm and extremely dynamic and responsive character, the germanium fuzz is still a favourite among many guitarists. 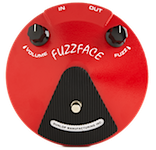 â€¨â€¨The red London Fuzz is one of my all time favourites. Featuring two matched germanium transistors, this oneâ€™s tweaked for a bit more gain and low end, placing the pedal somewhere between most germanium and silicon models. Using the guitar volume control, you can get anything from warm cleans to growling fuzz, with all those lovely fuzz harmonics. The pedal stands well on its own but but you should also try it in combo with a transparent booster.â€¨
Power: 9V battery and adapter (positive!)
â€¨Gilmour tones: ASoS – DSotM
â€¨Smaller amps/bedroom level: 6/10

â€¨Again, one of my favourite sounding fuzz pedals. The Fuzz Phrase feature a matched pair of the OC44 germanium transistors. Of all the germanium fuzzes Iâ€™ve tried, this is definitely the most dynamic one. Roll down the guitar volume for a cleaner tone and it still maintains its character and tone. Set it to full blown fuzz on a hot tube amp and youâ€™ll get tones right up there in the Big Muff territory. Like the red London Fuzz, the Fuzz Phrase also has a bit more gain and lower end than most other germaniums.
â€¨Power: 9V battery and adapter (positive!)
â€¨Gilmour tones: ASoS – Meddle
â€¨Smaller amps/bedroom level: 7/10

â€¨Featuring a pair of NKT275 germanium transistors, this is perhaps the most authentic sounding germanium Fuzz Face on the market. Classic Hendrix and early Gilmour with just the right amount of gain, top and lower end. The SunFace cleans up incredibly well, allowing the pedal to act as a booster and overdrive, as well as classic fuzz. The current version of the NKT275 also feature a Sundial, a third control that basically acts like a bias control. Definitely the smoothest and most authentic sounding of the germaniums listed here.
â€¨Power: 9V battery
â€¨Gilmour tones: ASoS – Meddle
â€¨Smaller amps/bedroom level: 7/10â€¨

Classic germanium circuit with a pair of PNP transistors, producing warm and smooth fuzz with lots of rich harmonics. In addition to the usual level and fuzz controls, the MKII also feature a contour control, adding a bit of mid boost, and an input/bias control, adjusting the amount of gain produced. The pedal sounds great and the contour mid range booster comes in handy on smaller setups and lower volume but if youâ€™re like me, preferring your fuzz as basic as possible, you might find it hard to dial in the right, vintage tones with this one.â€¨
Power: 9V battery and adapter (positive)
â€¨Gilmour tones: ASoS – Meddleâ€¨
Smaller amps/bedroom level: 8/10

â€¨Compared to the germanium transistor circuit, the silicon transistor fuzz has more gain and sustain, brighter top and fatter lower end. Some find these a bit too wild and hard to tame and often with good reason. However, with some tweaking and the right amp for the job, you can make a silicon fuzz sing like a Big Muff. 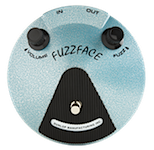 This is a faithful clone of the 1969-70 Hendrix era Dallas Arbiter Fuzz Face with the BC108 silicon transistors, a handwired brown circuit board and the classic looking hammertone chassis. Of all the current Dunlop reissues and signature models, this is the most vintage sounding, with an open and dynamic tone, lots of gain and a well balanced frequency spectrum.
â€¨Power: 9V battery only
â€¨Gilmour tones: Pompeii – DSotMâ€¨
Smaller amps/bedroom level: 7/10

â€¨This appropriately coloured blue fuzz has a bright and fairly aggressive tone with lots of gain. Compared to most other silicon fuzz, the blue London Fuzz has a smoother tone and an internal trimmer allows you to tweak the tone even further. The pedal cleans up nicely with the guitar volume control and it also work better than most on lower volume and bedroom setups.â€¨
Power: 9V battery and adapter (positive)â€¨
Gilmour tones: Pompeii – DSotMâ€¨
Smaller amps/bedroom level: 8/10

â€¨The Classic 108 feature, as the name implies, BC108 silicon transistors. The pedal produce a bright, saturated gain with lots of sustain and character. An additional buffer switch, eliminates the strange oscillation sounds you get from placing wahs in front of fuzz pedals. Although this pedal is very similar to the Hendrix JHF-1, I donâ€™t think it sounds nearly as open and dynamic as neither the Hendrix nor other clones. Nevertheless, classic fuzz tones and a pedalboard friendly circuit.â€¨
Power: 9V battery and adapter
â€¨Gilmour tones: Pompeii – DSotMâ€¨
Smaller amps/bedroom level: 6/10

The FZ-5 isnâ€™t really a fuzz in the vintage sense of things but rather a modelling pedal based on Bossâ€™ COSM technology. You can choose from different kinds of fuzz tones and models, including the classic germanium Fuzz Face and Hendrixâ€™s Octavia. All in all an OK fuzz pedal but far from as vintage and authentic sounding as the many clones available. Still though, pairing this one up with a transparent booster, will smooth out most of those harsh digital overtones and add a bit of that vintage flavour.
â€¨Power: 9V battery and adapter
â€¨Gilmour tones: ASoS – DSotMâ€¨
Smaller amps/bedroom level: 4/10

The SunFace 108 has been my main fuzz for years and whenever I replace it, I soon return to it. Like the SunFace NKT275 germanium fuzz, the BC108 has that authentic vintage flavour and authentic circuit. The tone is bright and smooth, with rich harmonics and sustain. The 108 stands well on its own but pair it up with a Colorsound Powerboost for even more sweet smoothness and gain.â€¨
Power: 9V batteryâ€¨
Gilmour tones: Pompeii – DSotM
â€¨Smaller amps/bedroom level: 7/10â€¨

â€¨Compared to the BC108, the BC109 transistor has a bit more of everything – more gain, lower end, growl and dirt. Definitely not the pedal if you want something easy going and mild! On a loud tube stack this one will sound and feel like a wild horse but with some practice, youâ€™ll learn how to tame it and make it produce a wide range of different tones, from crunchy rhythms (Childhoodâ€™s End, Money) to wild fuzz (Echoes, Time).â€¨
Power: 9V battery
â€¨Gilmour tones: Pompeii – DSotMâ€¨
Smaller amps/bedroom level: 6/10â€¨

The latest version of the â€™70 Fuzz feature a mids control for a bit more presence and apparently, a mismatched pair of BC108 silicon transistors for extra dirt and grit. This is no doubt one of the more nasty and heavier sounding fuzz pedal Iâ€™ve played and combining it with a booster or an overdriven tube amp, will make your ears bleed. You can dial in a wide range of tones with this one but it doesnâ€™t quite sound as open and clean and the SunFace silicons. Personally, I also prefer fuzz pedals that cleans up better with the guitar volume.
â€¨Power: 9V battery and adapter
â€¨Gilmour tones: Pompeii – DSotMâ€¨S
maller amps/bedroom level: 6/10â€¨

The Olympia is perhaps not your typical Gilmour fuzz but itâ€™s damn cool anyway. Designed to sound somewhere between a Tonebender, Fuzz Face and Big Muff, this pedal doesnâ€™t really sound like anything else Iâ€™ve tried. Itâ€™s loud and aggressive with a huge amount of gain and lower end. Still, itâ€™s very easy to dial in great, vintage sounding tones and tame it with the guitar volume. The Olympia stands bets on its own and works very well on lower levels and bedroom setups. Highly recommended if youâ€™re looking for something slightly different that the usual fuzz.
â€¨Power: 9V battery and adapter
â€¨Gilmour tones: Pompeii – DSotMâ€¨
Smaller amps/bedroom level: 8/10

Feel free to use the comments field below and share your experience, recommendations and tips!