On an Island is David’s third solo album and like the first album, it feature many references to his musical roots and inspirations. It’s an honest and fairly laidback album allowing David’s tone and playing to shine without too much trickery.

The Black Strat is once again David’s main guitar but he also using a wide range of different instruments including acoustic slide guitars and saxophone.

Note: David is seen having several single stomp boxes laying around in the different studios while recording the album. It is likely that he used different effects or single pedals when required on the initial demo sessions and later recording sessions than what is listed above. 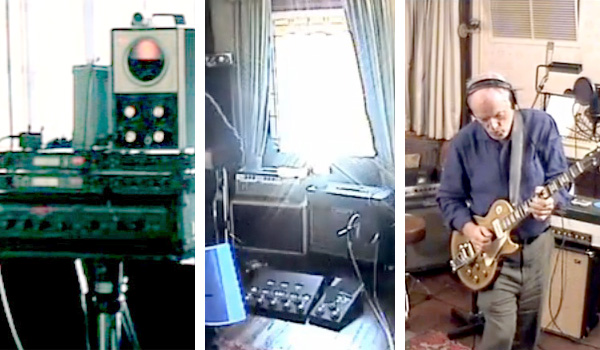 (left) David used a smaller version of the stage rack for the sessions featuring a Conn Strobo tuner, 2 Digitech IPS 33B harmonizers and a MXR Digital Delay II. (middle) Fender Bandmaster and Fender 2×12 speaker cabinet, Hiwatt SA212 50w combo and the Pete Cornish 1999 All Tubes pedal board in front. (right) David with the 1956 Gibson Les Paul Goldtop and behind to his right is a Marshall (unknown model) with a 1×12 speaker cabinet.

Additionally the board was designed not to allow two distortion pedals to be engaged at once, only distortion+overdrive. The board was brought on a backup on the On an Island 2006 tour and later used for 2010 guest appearances.

David is also seen stacking a huge variety of guitars and amps for the sessions and might have used different setups on both the initial demo sessions and recording sessions than what is listed here. 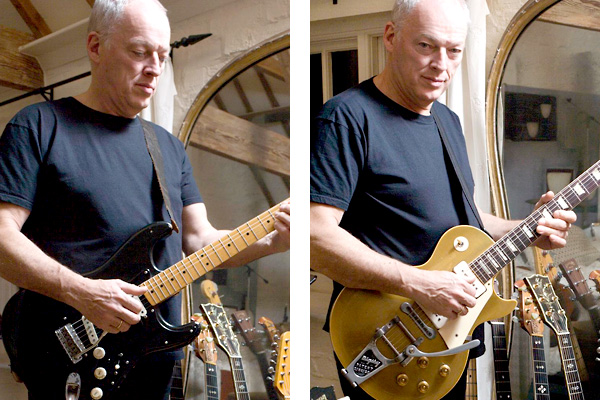 David pictured in his home studio with the main guitars that were used for On an Island – the Black Strat and a 1956 Gibson Les Paul Goldtop with Bigsby tremolo system. (left) A 1950s Gretsch Duo Jet. David got the guitar around1976-77 and has used it on several albums since. The guitar was featured on Then I Close My Eyes and Where We Start. (middle) Davids main slide for the album, a Gibson 1940s EH-150 lap steel. (right) This Turkish Cumbus was used for the opening of Then I Close My Eyes.

David’s main setup for the sessions was a Fender Tweed mic’ed with a Shure SM57 slightly off center about 4 inches away and a Coles 4040 ribbon straight at the center of the cone (The Shure was mixed slightly higher). All instruments were connected with Evidence Audio speaker cables.