A Momentary Lapse of Reason 1987

David’s setup during the Momentary Lapse recording sessions was very much a continuance of the About Face rig with mostly Boss and Fender units. His main guitar for the album was a Steinberger GL3T although the period marks the beginning of a long relationship with the red 1983 ’57 Stratocaster with the EMG pickups.

Note: Very little is documented from the sessions. David’s main setup was a split signal with one lead directly into a Gallien-Krueger amp using its overdrive/distortion channel. The second lead was fed through a Boss Hm-2, Boss Digital Delay (possibly DD-2) and a Boss GE-7 into a Fender Super Champ amp.

The intro on Sorrow was recorded with a Big Muff into a Fender Concert combo and the recorded signal was fed through Floyd’s Quad PA system at the LA Sports Arena. 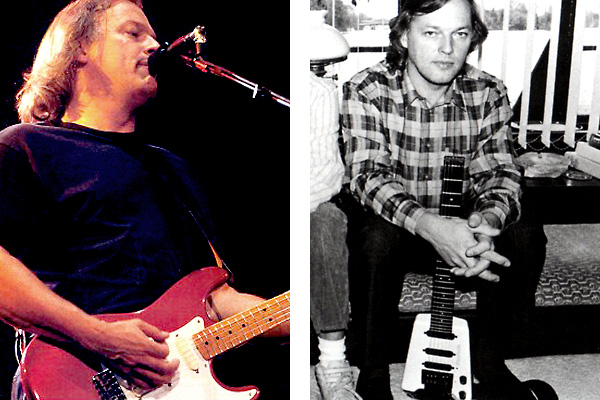 David pictured with his two main guitars for Momentary Lapse of Reason; the 1983 candy apple red ’57 reissue Fender Stratocaster and a Steinberger GL3T both with EMG SA pickups.