The studio section of Ummagumma was recorded between January and June while the live portion of the album feature recordings from different venues in late April and early May on the very last leg of the Saucerful of Secrets tour.

David’s rig for the studio sessions is identical to his Saucerful and More setups but he is also experimenting with Leslie amps for the first time, multi layered guitars and backwards effects.

Note: David often switched back and forth between Vox and Cry Baby wah wahs as he also did up until 1977 where he settled with the Cry Baby. Footage from spring 1969 shows a Cry Baby in his setup.

Note: It’s not documented which guitars David used for the studio sessions. Although one can clearly hear a Stratocaster on the songs he might also have used the newly acquired naural brown Telecaster. There also no records of which amps he used but it’s fair to assume that he used his Selmer Stereomaster stacks and/or in-house amps at Abbey Road. 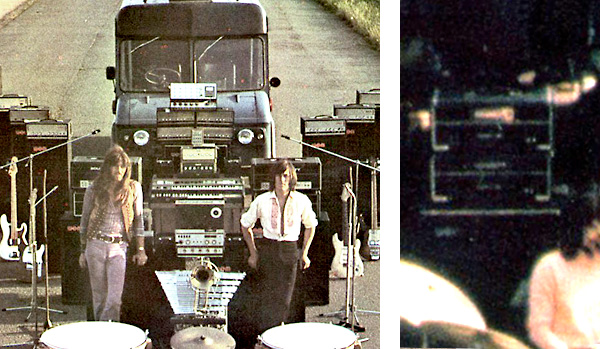 The Ummagumma album cover feature pictures of Pink Floyd’s equipment shot around August/September 1969. On the image to the left is David natural brown Telecaster and his blonde Stratocaster. Behind Floyd’s roadies Peter Watts and Alan Stiles you can spot two Sound City and two Hiwatt heads. The Sound Citys were most likely either Roger’s or Rick’s while the Hiwatts were newly purchased by David sometime in the summer months. (right) A detailed picture of the Hiwatts.

The back of the Ummagumma album cover shows two Sound City L100 amp heads on top of two Hiwatt DR103 head (behind roadies Peter Watts and Alan Stiles). It’s been speculated whether the Sound Citys were used by David in a transition period between Selmer and Hiwatt. However there is no footage supporting this and it’s more likely that these were either used as spares or in either Roger’s or Rick’s setups.

The Hiwatts in the picture are most likely David’s that were purchased during the summer. The first commercially available Hiwatts emerged around March/April 1969 so David was together with Who and Jethro Tull among the very first to use these amps.