David’s second solo album About Face was released in the middle of the 1980s and at a time when everyone just assumed that Pink Floyd was dead. Including the record company. David was launched as the new guitar hero and a true rock star and the album featured a stunning list of guest musicians.

David’s rig was also heavily influenced by the 80s with all new Boss switching system and Fender amps. The tour was a mediocre hit but it gave David enough confidence to the awake the Floyd beast from its sleep shortly after.

Very little is documented and known from the sessions. The album was recorded in Paris, France during autumn 1983 and it’s likely that David used a combination of several setups including one of the Pete Cornish pedal boards that were used on The Wall (album) and single pedals.

The main setup though seems to have been a Boss HM2 distortion boosting a Mesa Boogie Mark 1 60w head with the MXR Digital Delay System I rack unit.

Note: David seems to have travelled with a slightly smaller rig than the picture below from 1986. Pictures from the European leg of the 1984 tour reveals only one MXR DDL I and MXR DDL II and there’s also a MXR Pitch Transposer and a Big Muff ram’s head (see inlay).

David might also have added new effects during the tour and the rig was also updated for 1985-86 guest appearances.

Presented in 1982, the SCC-700 was ahead of its time. It allowed you to place seven BOSS compact pedals on the board and, with an audio switcher and computer control, store 32 memories of pedal on/off status and connection sequence. The SCC-700C foot controller then recalled the 32 memories on the effects board. – from the official Boss site 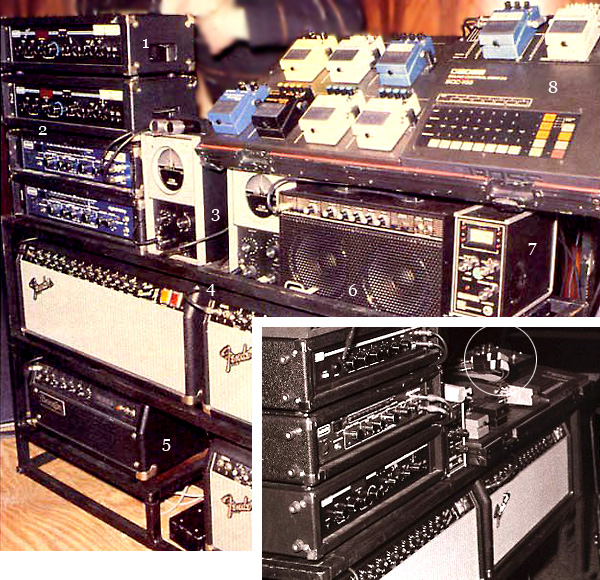 Note: David used a Mesa Boogie Mark 1 head in combination with a Boss HM2 for the sessions. There’s no documentation of other amps but it’s likely that he used the Hiwatt and WEM combo and/or Fender amps. 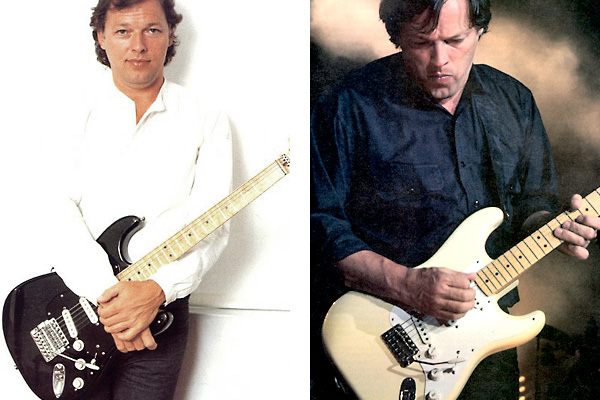 (left) David pictured with the Black Strat featuring a Charvel 22-frets maple neck that was fitted in 1983 and the Kahler tremolo system with locking tuners. The Black Strat was only used for a couple of songs with a drop D tuning. (right) Although David had bought several new 1983 ’57 Fender Strats prior to the tour including the candy apple red, he chose the cream ’57 as his main guitar for the tour. The guitar was later fitted with EMG SA pickups.

(left) David used a Ovation Custom Legend 1619 for the tour. The guitar was also famously used on the Comfortably Numb recording sessions. (middle) Among the six guitars David bought prior to the tour was this 1983 ’62 reissue. The guitar was later fitted with a Roland custom synth pickup that powered the Roland GR700 guitar synth module. (right) David pictured in Copenhagen, Denmark April 25 194 playing a Roger Giffin custom headless 19 inch scale guitar.

Note: The main guitar signal went through a Mesa/Boogie top for boost, similar to a pre-amp (controlled with an on/off footpedal). The signal then travelled through the Boss SCC-700 and split into stereo by a Boss CE-3. These two signals were fed into two separate Fender Twins and out in the speaker cabs.