PULSE and the 1994 world tour sees David using the most complex rig to date the period and it also marks the return of many of his old effects and amps.

During the early 90s the grunge movement rediscovers Big Muffs and analog pedals and David also seem to be inspired by the resurgence of the classic pedals.

The decision to perform Dark Side of the Moon in its entirety also meant going back to the album and replicate sounds for authenticity. Despite the grand scale of the stage rig David would rarely used more than 3-4 pedals at once allowing the guitar and powerful Hiwatt rig to shine through. 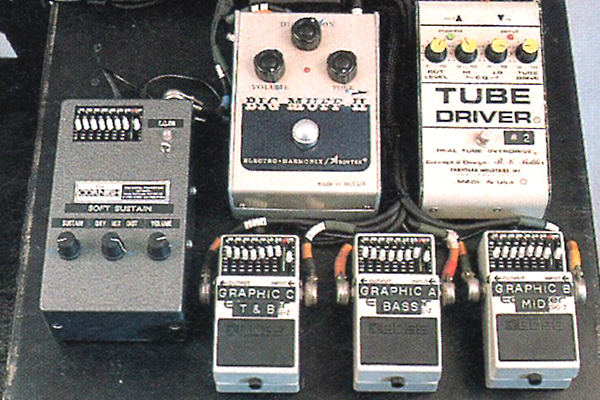 Note: Pete Cornish modified most of David’s effects for both correct level and impedance matching. He also included several custom features for improved tone and usability, such as changing capacitors to hight temperature, low leakage, types and changing transistors and resistors to low noise types.

– All effects has specially designed separate power supplies to prevent currant interferance.
– The Boss GE-7 EQs are modified by Cornish to give a flatter response at zero or flat and a better overall signal.
– The Ernie Ball volume pedal is modified with a 10k pot to reduce high end signal loss.
– The Cornish Soft Sustain is an early version of the current SS-2 including a Boss GE-7 EQ with the sliders ontop of the box. This feature was never used.
– The UniVibe has been modified into a rack unit with a 2-mode switch for fast and slow settings with individual speed controls. 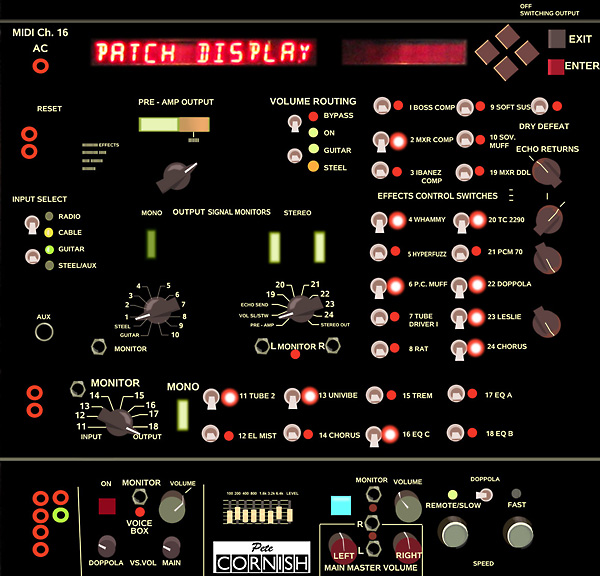 A graphic illustration of the Pete Cornish routing system in the left side rack. The system allowed for multiple effect combinations controled with the Bradshaw foot control board.
Image used with permission from Frederic Peynet. 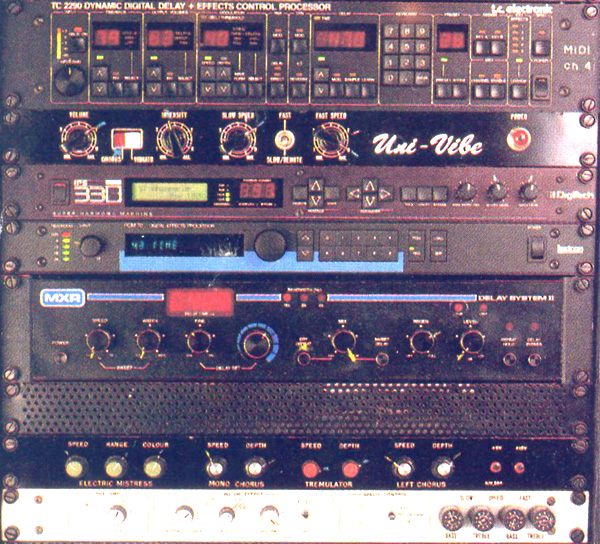 David’s system was built to be as user friendly as possible with the cleanest possible audio signal, using only quality components to eliminate hums and RF interferance.

The Pete Cornish routing system in the left rack, is basically 24 send/returns controlled via the Bradshaw footboard, which was modified by Cornish (same board as used in 1987-90). It had individual on/off switches for all send/returns and a microprocessor which calls up presets from the rack units. 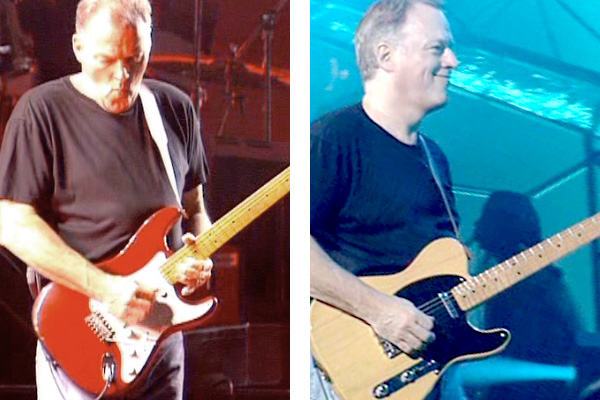 David with his two main guitars for the tour – the candy apple red 1983 Fender ’57 reissue Stratocaster with EMG SA pickups and the Fender ’52 reissue Telecaster. David had two identical Telecasters, one for Run Like Hell with drop D tuning and one in regular tuning for Astronomy Domine. 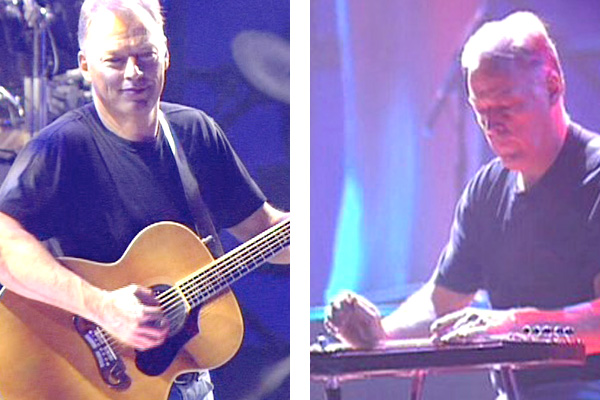 David pictured with a Gibson J-200 Celebrity acoustic steel string and the red Jedson lap steel that were used on High Hopes and One of These Days with an open Em chord tuning.

Hiwatt DR103 All Purpose 100W heads
– With Mullard 4xEL34 power tubes and 4xECC83 pre-amp tubes and modified by Cornish to just use the power amp stage (master volume and presence controls) and for linked normal and brilliance inputs. One amp is dry and the other has a Boss CE-2 chorus signal. The third head is a spare.
3 Hiwatt STA-100 Slaves amp heads
– With Mullard tubes. These amps had no preamp stage. One was powering the Hail Talk Box with a dummy load, and the other two powered the Doppola rotating speakers.
Alembic F-2B tube preamp
– Main preamp for the rig.
2 WEM Super Starfinder 200 cabinets
– with 4×12″ Fane Crescendo speakers.
2 Marshall JCM 800 400w cabinets
– with 4×12″ Celestion G12M speakers.
2 Doppola rotating speakers
– with 2×6″ 100W speakers in each. 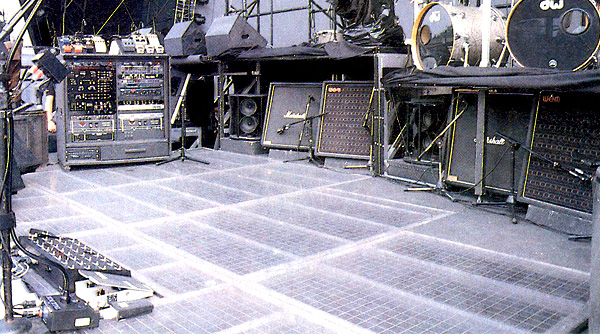 David stage setup during the Division Bell tour.
L-R: Mic stand with monitor mixer and a Heil Talk Box, the Bradshaw foot control board with two Ernie Ball volume pedals (one used as expression for the Whammy effect), far on the back is the main effects rack with the pedals on top and Cornish routing system in the left side of rack. Behind David has his stereo setup with the Doppola rotating speakers, Marshall and WEM cabs.