Animals was partly written and rehearsed during the Dark Side of the Moon tour in 1974 and during recording sessions in 1976 after a nearly a year away from touring. Animals also marks the beginning of David’s relationship with pedalboard guru Pete Cornish and the pedal that almost would become synonymous with David’s tone. The Big Muff.

David’s guitar collection also expanded around this time with the acquiring of the #0001 Stratocaster, the 1950s Gretsch Duo Jet and the 1955 Fender Esquire among others. Pink Floyd toured from January to July 1977 performing Animals and Wish You Were Here in their entirety.

Note: The board is dated Mach 1976 but its not documented whether it was finished for the recording sessions or not. It’s likely however that David either used both the board and single pedals or just single pedals for the sessions.

CLICK FOR BIGGER IMAGE.
The Pete Cornish pedal board pictured during the rehearsals at Olympia Exhibition Hall, London UK, January 1977. To left the Morley EVO-1 echo pedal and footswitch for Yamaha RA200 rotating speaker cabinet and on top an Electric Mistress and Big Muff connection via send & returns on the board. 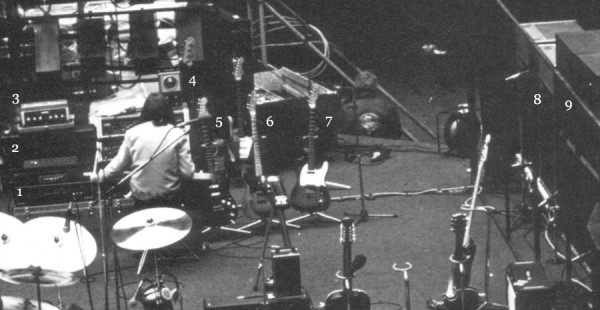 David Animals pedal board dates from early 1976 and was used for most part of the recording sessions and the following tour. It is also likely taht David used single pedals for the recording sessions. The board was slightly modified and updated just prior to the tour with additional effects and routing and it also underwent an update in October 1977 after the tour.

The board was later used on David’s debut solo album in 1978 and as the main stage board during the Wall tour in 1980-81. The board has two inputs for guitars (input is selected with an on/off selector pedal). The signal is then split into a Conn Strobo tuner and a master bypass. The signal travels through the effects and then to three outputs for amps, either in solo or combined.

– The PC Custom Fuzz P-1 is often listed as PC Big Muff and PC Fuzz.
– The Cry Baby wah wah has a custom made reverse switch to reverse the input/output connection for seagull/Echoes effects.
– The PC Custom Tone pedal was a modified Cry Baby chassis with a Fender Telecaster tone circuit. 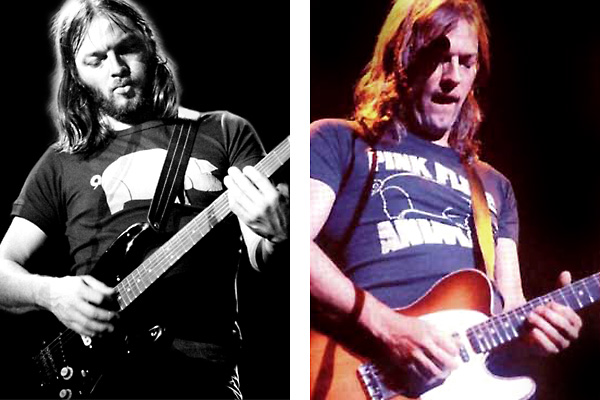 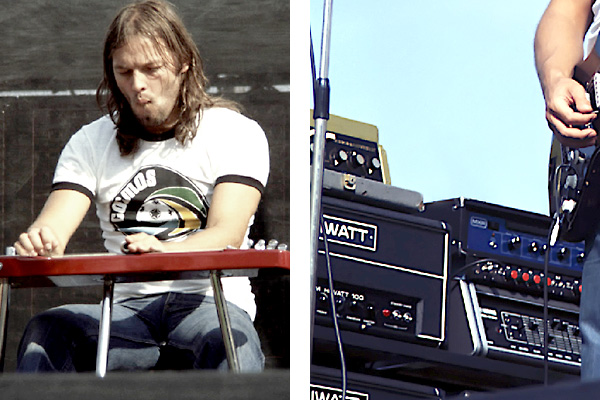 (left) David playing slides on the red Jedson lap steel. This was used on Shine On You Crazy Diamond (part 6-9). (right) A close up of David’s Animals rig with a Binson Echorec II on top of the Hiwatt DR103s and next to it a MXR Digital Delay System I, the Alembic F2-B preamp and a Yamaha PE 200A 200w amp. It is not known how this amp was incorporated in the signal chain.

Note: David employed a Telecaster for both Dogs and Sheep. Although the 1959 Fender Custom was used on the tour while performing Dogs David might also have used the 1955 Fender Eqsquire for the sessions. The guitar is also seen present at the rehearsals at the Olympia Exhibition Hall, London UK in January but apparently never brought on tour. David pictured in Cleveland, Ohio, Municipal Stadium, June 25th 1977 with an unidentified Stratocaster. The guitar might have been a Fender with Schecter parts.