Most of Wish You Were Here were written and rehearsed during the Dark Side of the Moon tour in 1974-75. Released in September Pink Floyd never toured to promote the album until the Animals tour in 1977 when it was performed in its entirety.

For the recording sessions David used more or less the same rig he had been touring with on the Dark Side tour. His playing and tone on the album is subtle and much more blues oriented than his earlier work. See Dark Side of the Moon for 1974-75 and Animals for 1977 setups.

Note: The list above is only the effects that are heard on the album. It’s not documented whether David used his 1973-75 pedal board for the sessions or single pedals. Probably both. See Dark Side of the Moon for a complete list of the pedalboard setup. 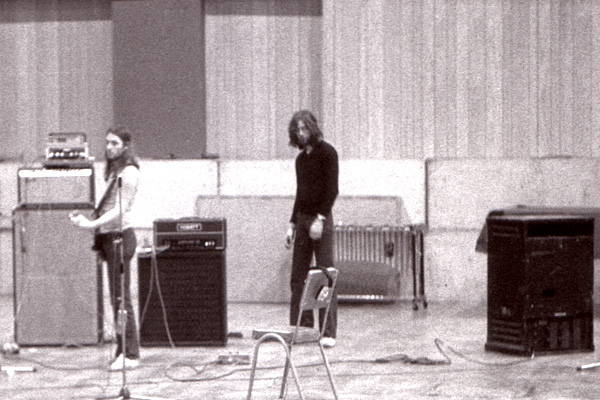 David and Phil Taylor in Abbey Road’s Studio 1 recording guitars for Shine On You Crazy Diamond. A Fender Dual Showman, Hiwatt DR103 and WEM speaker cabinet and a Leslie 147 was employed for the session. On top of the Fender is a Binson Echorec II.

Note: It is also reported that David used Fender Twin Reverbs during the sessions although this is not confirmed.