The Dark Side of the Moon period ranges from the premiere of the suite Eclipse in January 1972 to their UK homecoming gig at the Knebworth Festival in July 1975. David gets his first pedal board when the Dark Side tour launches in the States in March 1973 and throughout the period he experiments with different pedals and guitars.

David’s playing also evolves from screaming fuzz tones to warmer blues oriented tones as they start to rehearse new material in medio 1974 (Shine On, Have a Cigar, Raving and Drooling and You Gotta Be Crazy). See Obscured By Clouds for David’s 1972 Eclipse stage rig.

Note: There’s no reports on which songs the HiFli was used on although some sources indicates that the auto filter was used to emulate Leslie tones on Any Colour You Like. 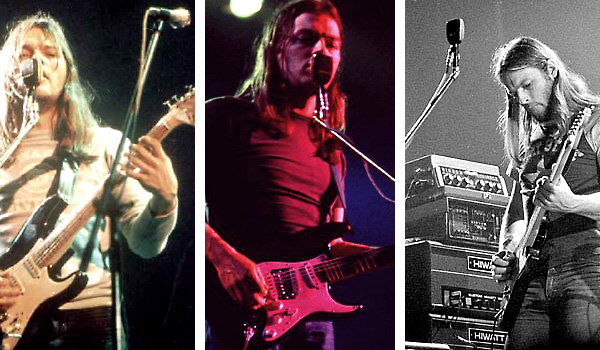 (left) David at the Eclipse/Dark Side of the Moon press-premiere, Raindbow Theatre, London, UK February 1972. The mic stand to the right was used during Any Colour You Like and hooked up to a Leslie cabinet when David sang/scatted along with his guitar. (middle) The Black Strat featured a Gibson PAF humbucker between January and June 1973. (right) David at the Earl’s Court Benefit concerts in May 1973 with the 3 Hiwatt heads rig and a Binson Echorec II and PE603 on top.

The board featured a Vox wah wah and UniVibe in 1973 but the Vox was replaced by a Cry Baby and the Univibe was taken out/or broken and a new one was placed beside the board in 1974. A MXR Phase 90 was also connected with send/returns during summer 1974.

Pink Floyd played both Set the Controls and Echoes in 1973 so the Vox wah wah must have had some reverse switch (or the jacks were manually switched) as David used the wah wah effect on Controls and the reverse connection seagull effect on Echoes.

The Hi-Fli processor was featured in David’s rig during the brief US tour in March 1973 and most notably at the charity gigs in Earl’s Court, London, UK in May 1973. It is not documented how and for what he used it.

(left) Dvaid with the Black Strat in 1974 now featuring the familiar black pickguard. (middle) David sometime during the 1975 leg of the Dark Side tour. The 1959 Fender Telecaster Custom was used for 1974-75 performances of Dogs. (right) David playing the blond Jedson lap steel sometime in 1974. Notice the Dallas Arbiter Fuzz Face on the floor. 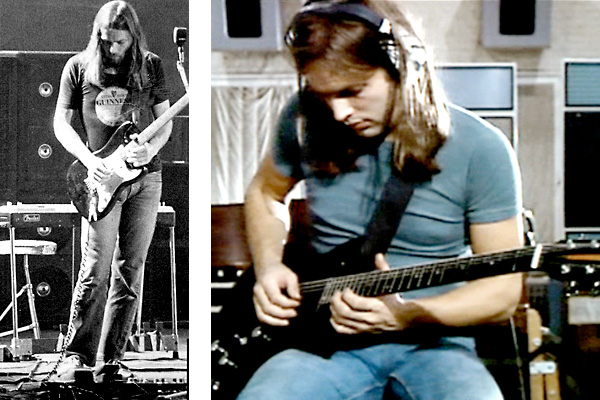 (left) David pictured in Paris, France June 22 1974. This is one of the very last performances with the white pickguard on the Black Strat. Behind David is the Fender 1000 twin neck steel guitar that was used for a handful of shows in early 1974 before David got the Jedsons. (right) David pictured with the Bill Lewis guitar in Abbey Road for the filming of the bonus features on Live at Pompeii. The guitar was famously used on Money.

Fender Stratocaster “The Black Strat”
– 1969 black alder body with a white pickguard, ’63 rosewood neck, stock Fender pickups and an additional mini switch allowing multiple pickup combinations. A Gibson PAF humbucker was custom fitted between the middle and bridge pickup in January ’73. It’s uncertain whether this was used on the recording sessions or not.
Fender 1000 twin neck pedal steel
– Breathe and Great Gig in the Sky recording sessions with an open G chord tuning (D G D G B E).
Bill Lewis custom guitar
– 1970 mahogany body with custom humbuckers and a 24-frets ebony neck. David used the guitar on the Money recording sessions but he might also have used it on Us & Them, Brain Damage and Eclipse although this is not documented.

Alan Parsons was the chief engineer on the sessions at Abbey Road studios and responsible for mic’ing David Gilmour’s guitar cabinet. In an interview with Premier Guitar (2012), Alan reveals that they used Neumann U87 (or U86) condenser mic’s on the guitar cabs. The mic were placed one foot or a foot and a half away from the cabinet. 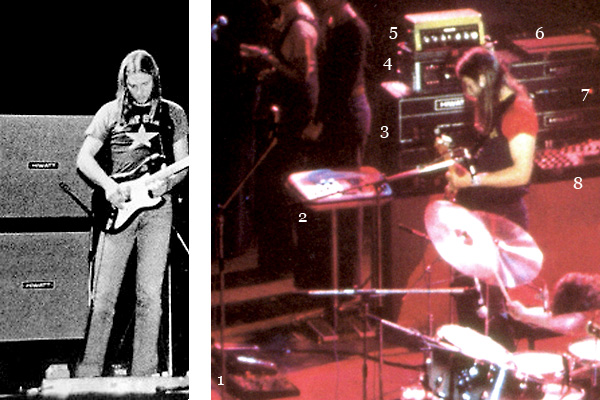 Note: Phil Taylor bought new Hiwatt heads and WEM speaker cabs for David during the summer 1974 rehearsals. These were used on the remainder of the tour (winter 1974 and spring 1975). The WEM cabs now included new Fane Crescendo speakers without the metal dust caps.