Pink Floyd’s legendary concert film was filmed in Pompeii, Italy in early October and Paris, France in early December 1971. The film is a great showcase of David’s sound and the classic 3 Hiwatt and 4 WEM cabs stack and not least, the Black Strat in its original form. With a minimum of effects David’s tone on songs like Echoes is considered one of his finest moments.

Note: A spare Fuzz Face can be seen lying next to David’s amps. 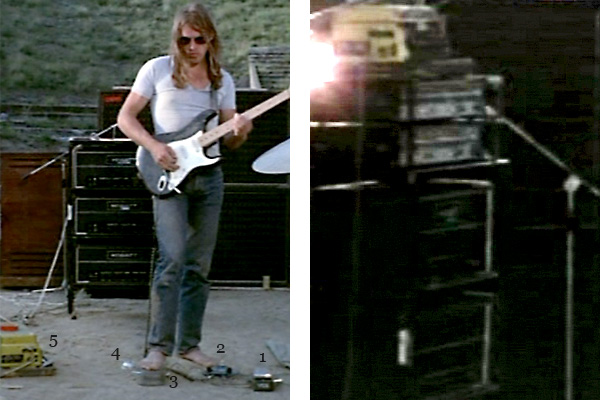 (left) David playing the Black Strat. Behind him is the 3 Hiwatt DR103 stack and to their left a Leslie 147 cabinet. Pedals on the ground (listed as in chain): 1. Vox wah wah, 2. Dallas Arbiter BC108 Fuzz Face, 3. DeArmond volume pedal, 4. Binson foot swtich and 5. Binson Echorec II. (right) David’s rig at the Paris studio sessions: 3 Hiwatt DR103 rack with the two HH solid state 100w heads and the Binson Echorec II on top.

Fender Stratocaster The Black Strat
– 1969 all stock with a black alder body, white pickguard and a maple neck with a large headstock. The same guitar is seen with a chrome volume knob at the Paris studio sessions (night footage).

Note: A Leslie 147 is seen to the left of David’s WEM speaker cabinets. It’s not documented whether he used it or if it belonged to the keyboard rig. David’s amp rig at the Paris sessions feature two HH solid state 100w amps in addition to the Hiwatts. These might have been an early version of the classic Alembic preamp setup driving the Leslie cabinet.

Acknowledgements and credits
Live at Pompeii (concert film 1971) and thanks to Rafal Zychal for help with research.