David’s classic 3 heads, 4 cabs and a Leslie setup dates from early 1971. He also replaces the germanium fuzz with the much more aggressive silicon transistor based Fuzz Face, which contributes in taking Pink Floyd in a heavier direction and away from the psychedelic Barrett era. Pink Floyd tour exstensively throughout the year and visits Japan and Australia in August.

Note: David switches from germanium to silicon Fuzz Face pedals in early 1971 although he is seen on several shows carrying both. A DeArmond volume/tone pedal is employed to tame the much more aggressive silicon fuzz. David is also seen using a Binson PE 603 Echorec in addition to the Binson II during mid summer European tour. 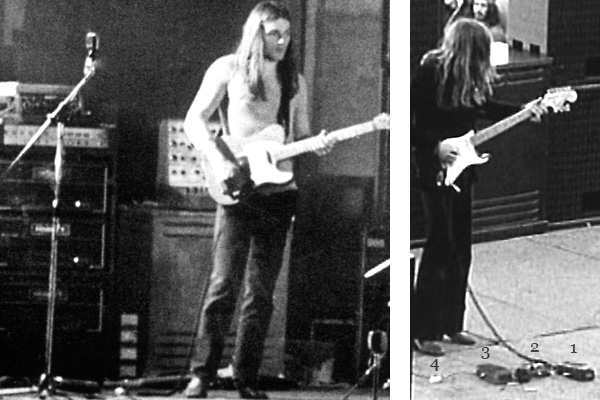 (left) David in Lyon, France June 12 1971 and his complete setup: Fender natural brown Telecaster, 3 heads Hiwatt DR103 stack with a HH 100w solid state amp on top and the Binson II echo unit. To the right of the rack is a Leslie 147 with a EMS VCS 3 synth on top. Notice the Black Strat lying on the floor in front of the Leslie. (right) David pictured with the Black Strat in Sydney, Australia August 15 1971. Pedals on the floor: 1. Vox wah wah, 2. Dallas Arbiter BC108 Fuzz Face, 3. DeArmond volume pedal, 4. Binson Echorec footswitch.

Note: David featured one (sometimes two) HH Electronic IC-100 heads in his rig throughout 1971. This might have been an early version of the classic Alembic preamp setup driving the Leslie cabinet in the rig.