It’s also around this time that David starts to collect guitars but perhaps more importantly – during the band’s visit to the States in May, he buys the now legendary Black Strat. Pink Floyd tours extensively throughout the year and into early 1971 releasing Atom Heart Mother in October and performs at many festivals including the Bath festival in June where David also uses the Black Strat for the first time.

Note: Throught the tours of 1970, David is seen experimenting with different fuzz pedals – blue and red NKT275 germanium Fuzz Faces and what looks like a Marshall/Solasound SupaFuzz. 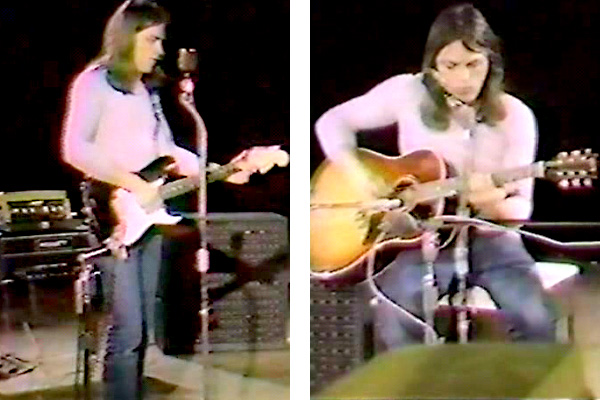 Pink Floyd recorded a studio performance in San Fransisco, USA on April 28 1970 for KQED TV. The appearance is a great showcase of their equipment at the time. (left) David’s playing his first black Stratocaster, a 1969 model with a rosewood neck. This was bought at Manny’s NY only days prior to the show but was lost during the robbery of the band’s equipment in May. Behind David is the Hiwatt with a Binson II on top and to his right the WEM Starfinder speaker cabinet. (right) David playing a Gibson J-45 acoustic steel string. This was also used on live shows throughout the spring.

Note: Atom Heart Mother was recorded between March and August 1970. On the early sessions David used the white Strat but it got stolen in May during the band’s US tour. For the remaining recording sessions David used the 1959 sunburst Strat and the Black Strat he had bough at Manny’s in late May on their way home from the States. It’s also likely that David used in-house amps that were available at Abbey Road. 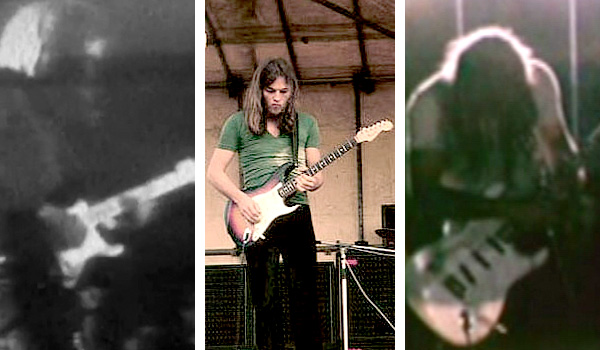 (left) David pictured at the Bath Festival June 28 1970. This was the first time that he used the Black Strat. (middle) David playing a sunburst Stratocaster (’59 body/’63 neck) at the Free Concert in Hyde Park, UK July 18. 1970. The neck later became the main neck for the Black Strat between 1972-79. (right) David pictured at the Saint Tropez Music Festival, France August 8 1970 playing a 196’s blonde Fender Stratocaster with the pickup covers taken off. 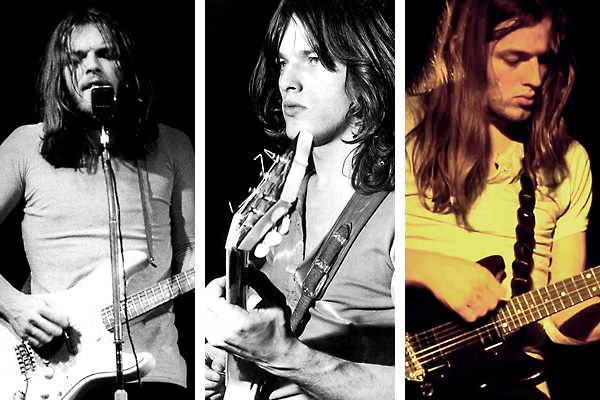 (left) David pictured with his main white late 1960s Stratocaster in Paris, France January 23 1970. The guitar got stolen during the robbery of Pink Floyd’s equipment in the States in May. (middle) David started collecting guitars in 1970 and he bought this double cutaway blonde Les Paul TV in Seattle on the band’s second visit to the States in 1970 in October. The guitar was used on a couple of shows on the US tour in late 1970. (right) David playing the Bill Lewis Custom guitar that he bought in Vancouver, Canda in October 1970. The guitar was used on several shows in Europe late autumn 1970 and later on Meddle and Dark Side of the Moon.

Note: David used only two Hiwatt heads and WEM cabinets during the early months of 1970. The classic 3 heads/4 cabs setup appeared sometime during summer 1970. David is also seen using a smaller setup on TV-shows throughout 1970 with only one Hiwatt head and a WEM cabinet (notably KQED show in April).