More was recorded in February 1969 while Pink Floyd were still touring and promoting A Saucerful of Secrets. David Gilmour used the white Stratocaster, a natural brown Telecaster and Selmer amps for the sessions and live performances.

The band never toured the album but spent much of 1969 performing a suite called The Man and the Journey, that featured several songs from the album as well as tracks from A Saucerful of Secrets, Ummagumma and new compositions.

The period stretches from March to April and throughout the year overlapping the recording and release of Ummagumma.

Note: David often swapped back and forth between Vox and Cry Baby wah wahs in the early 70s up until 1977, when he settled for the Cry Baby. 1968 performances shows a VOX, while footage from Royal Festival Hall, London UK in April 1969 shows a Cry Baby. 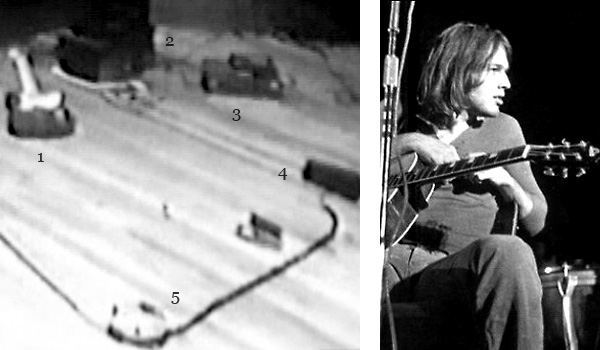 Pink Floyd premiered The Man and the Journey at the Royal Festival Hall in London, UK April 14 1969. The suite was loosely based on the same topics as Dark Side of the Moon consisting of earlier material, songs from More and new instrumentals. The pictures above is from the rehearsals for the show at the venue. David’s rig featured 1. natural brown Fender Telecaster, 2 Selmer Stereomaster amp (with a tape recorder on top playing sound effects), 3 Binson Echorec II, 4. Cry Baby wah wah and 5. Dallas Arbiter Fuzz Face (germanium transistor). Picture to the right shows David at the rehearsals, with a Levin acoustic steel string guitar.

Note: There’s no available footage or sources indicating which amps that were used for the More recording sessions. The sessions took place before David started using Hiwatts so it’s fair to assume that he either used the Selmer Stereomaster 100w heads with matching cabinets, or amps that were available in the studio. 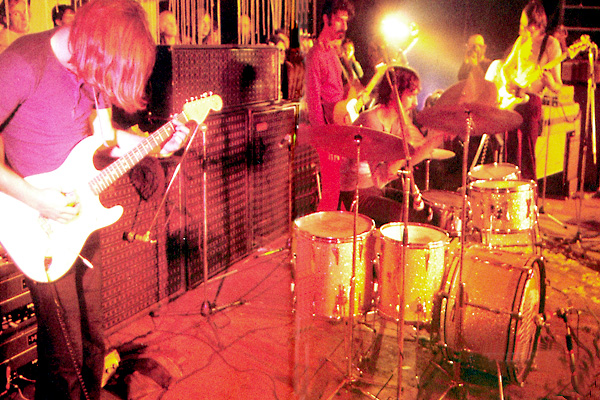 Pink Floyd performing Interstellar Overdrive with Frank Zappa at the Actuel Festival, Amougines, Belgium October 25 1969. This is one of the early shots of David with his new Hiwatt rig and Zappa is playing David’s natural brown Telecaster.

Fender Stratocaster
– 1966-67 all stock with a white ash body, white pickguard and a rosewood 4-bolt neck with a large headstock.
Fender Telecaster
– Natural brown body, with maple neck and white pickguard. The neck pickup has no cover – either modified or replaced by a Stratocaster pickup.
Levin western acoustic steel string guitar

Note: The Hiwatts and WEM cabinets replaced the Selmer amps and speaker cabinets in July or August and was not used on the More recording sessions. The first commercially available Hiwatts emerged around March/April 1969, so David was together with Who and Jethro Tull among the very first to use these amps.

The natural brown Telecaster is first seen at the Royal Festival Hall show UK, London April 14 1969. David continued to use the guitar for a number of performances 1969-71. According to Phil Taylor’s book The Black Strat, the guitar was mainly used for performing Atom Heart Mother (1970-71).