David’s 2006 On an Island tour was hugely successful not only because of the attendance but also in terms of his playing and tone. The grand finale at the shipyard in Gdansk is considered by many as one of David’s finest moments.

As on On an Island David returns to his classic sounds with a rig that’s very close to what he travelled with in the mid 70s including a brand new Pete Cornish pedal board and the legendary Black Strat. The period also includes several TV-appearances and the Barn Jam sessions in January 2007.

Pete Cornish All Tubes MKII pedal board and
additional effects

Effects added in May, lying ontop of the board, connected via send/return
Electro Harmonix Big Muff (triangle)
T-Rex Replica delay 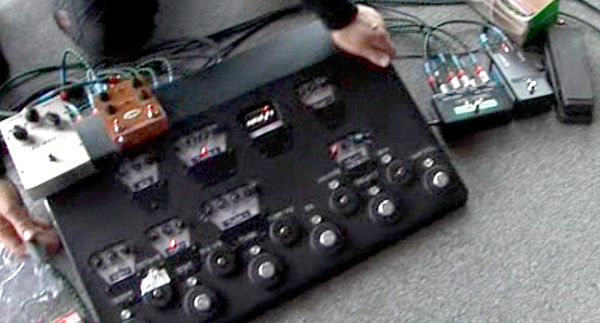 The Pete Cornish 2006 All Tubes MKII pedal board. David uncluded a Big Muff triangle model and a TRex Replica delay prior to the second European leg of the tour in May. The pedals were likely used for the Echoes funky part and were switched on/off simultaneously. Next to the board is a Pete Cornish line selector, Pete Cornish reverse wah wah switcher and a Cry Baby wah wah. 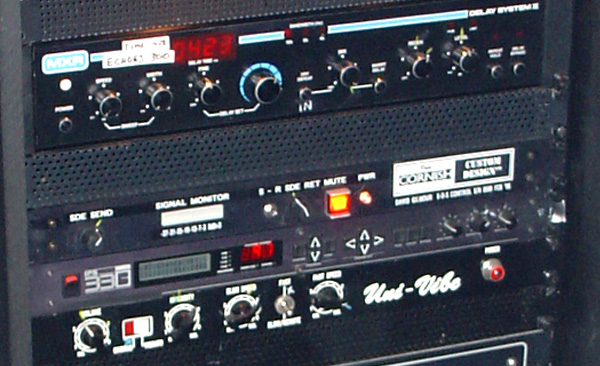 The top units in the stage effects rack – MXR Digital Delay II, Pete Cornish Sound on Sound unit, Digitech IPS 33B harmonizer and a UniVibe modified into a rack unit with a 2-mode switcher for fast and slow speed with individual speed controls.

Notes: The pedal board was constructed by Pete Cornish in early 2006 to be used as David’s main board for the On an Island tour. The board featured Cornish custom tube preamps between each effect to ensure minimum signal loss. All pedals were placed upside down allowing David to see the control knobs in the dark on stage.

– The BK Tube Drivers was especially ordered from Butler Audio early 2006. They both have one Yugo 12AX7 tube each.
– The Boss GE-7 is modified by Pete Cornish to give a flatter response at zero or flat.
– The Pete Cornish P-1 or Precision Fuzz is a straight clone of David’s old ram’s head Big Muff included in the old Animals/Wall stage board.
– The Demeter Compulator is a compressor based on the tube rack compressors often used in recording studios. The sound is similar to a MXR Dynacomp, but much more dynamic. The unit has a gain control with a possible 30db volume drop, this allows to adjust the volume to the other effects or turn it up to max 26dB for pickups with weak output.

David also had the 1999 Pete Cornish All Tubes MKI pedal board on stage lying next to the effect rack as a backup. David is also seen trying out an Electro Harmonix Big Muff ram’s head and a Robert Keeley Fuzz Head at the Bray rehearsal studios in May. 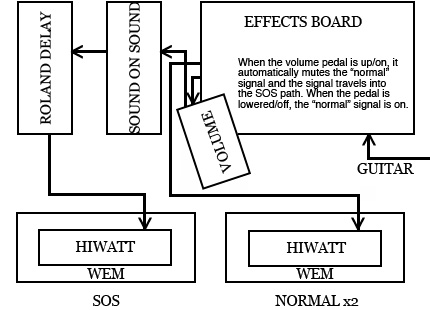 The Sound on Sound effect was something David introduced on the 2001/02 acoustic shows. He wanted to be able to play Shine On without using keyboards and developed this technique of sustaining a chord with delay and playing on top of it.

The Sound on Sound effect, isn’t an effect in form of a pedal but rather the effect achieved when splitting the signal in two with a long delay assigned to one channel.

David strums a chord and makes a volume swell with the volume pedal assigned for the Sound on Sound channel. The signal travels to the Sound on Sound unit (basically a A/B router unit made by Pete Cornish) and into the Roland digital delay, which is set to 1500ms lasting about 20 seconds.

The signal then travels into a Hiwatt and WEM cabinet used only for this effect. Gilmour lowers the volume pedal and plays a solo fed through the main signal path, while the Sound on Sound pad is sustained by the long delay. The pattern is repeated for each chord.

3 Hiwatt DR103 All Purpose 100W heads
– With Mullard 4xEL34 power tubes and 4xECC83 pre-amp tubes. Modified for linked normal and brilliance inputs. Two main heads and a third for the Sound on Sound unit. There’s also spotted a 4th head backup behind the rack.
3 WEM Super Starfinder 200 cabinets
– with 4×12″ Fane Crescendo speakers. One of the cabs was used for the Sound on Sound unit. 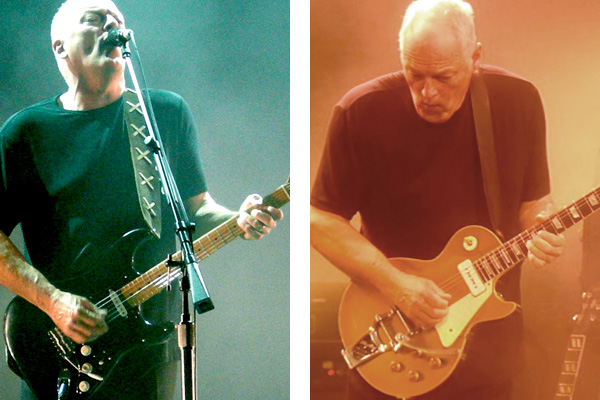 David pictured with the Black Stratocaster, his main guitar for the tour, and a 1956 Gibson Les Paul Goldtop with a Bigsby tremolo system. 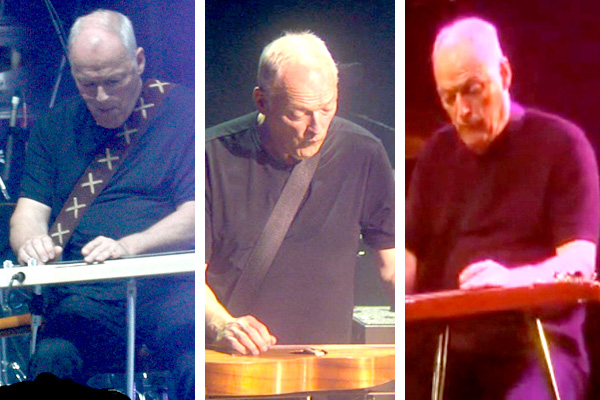 David is seen with several variations of his main rig during the tour, scaled down for TV-shows and special appearances. He is also spotted trying out different guitars during rehearsals.

Fender Stratocaster
– 1950s model with tobacco sunburst body with maple neck, seen at the Black Island Studios prior to the tour.
Fender Telecaster
– 1959 model with three colour sunburst alder body and rosewood neck, seen at rehearsals at Bray Film studios May 18th. This is the same Telecaster used during the 1974-75 and 1977 tours.
Rickenbacker frying pan A-22 lap steel
– Barn Jam sessions January 2007, Jam #166 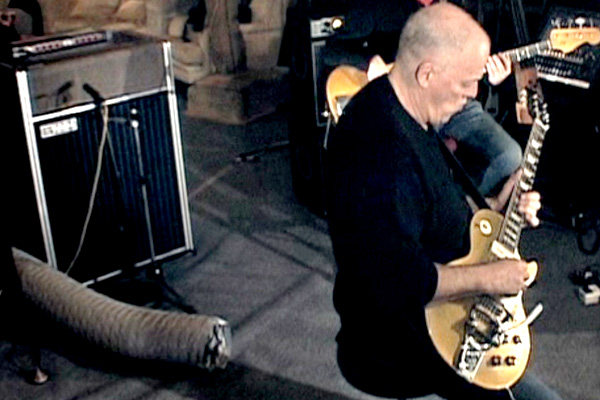 David pictured during the Barn Jam sessions in January 2007 playing a 1956 Gibson Les Paul Goldtop with a Bigsby tremolo system and in the back the Yamaha RA200 rotating speaker cabinet with an Alembic F2-B preamp on top.

David used a wide range of picks including Herco Flex 75, D’Andrea custom 354s (white), Fender 354 (tortoise) and Fender 351 (medium). All electric guitars were strung with GHS Boomers (custom set 0.10-0.48 for Strats and 0.10,5-0.50 for the Les Paul), Ernie Ball Earthwound Light’s on the acoustics and D’Addario EHR360 half rounds on electric lap slides.

David used his old Hiwatt heads that Phil Taylor bought from Dave Reeves in medio ’74. The heads was overhauled by Pete Cornish prior to the tour, early 2006. The WEM cabinets are are mic’ed with one Shure KSM 32 each.

All instruments, pedals and amps were connected with Evidence Audio cables.

Evidence Audio cable setup:
– On stage, David is using the Melody for his Strats, lap steels and other electric guitars, while in a studio setting he prefers the Lyric HG.
– Lyric HG for acoustic guitars.
– Lyric HG between Cornish pedalboard and additional effect units.
– Siren speakercables between head and cabinets, and used to rewire the inside of combo amps and cabinets.

Acknowledgements and credits
Remember That Night (concert film 2007), Live in Gdansk (album and concert film 2008), davidgilmour.com, demeteramps.com, alessandro-products.com, Total Production Magazine (2006), petecornish.co.uk (The Birth of a PedalBoard feature), Thanks to Rafal Zychal, Martin Campbell, Eivind Mørk Engdal, John Roscoe, Frederic Peynet and Tony Farinella for help with research. The feature is also based on the shows in Amsterdam, Holland and London, UK which I attended. See feature for other references.